Who was Leon Trotsky?

Leon Trotsky was very much a key figure in the 1917 revolutions that saw the Bolsheviks take power after ousting the Russian royal family. At one stage he was second only to Lenin in terms of power but after Stalin seized control, Trotsky was exiled where he met with a grisly death.

Trotsky was born Lev Davidovich Bronshtein in Tanovka, which in now part of the Ukraine, on 07th November 1879. He was born into a fairly wealthy, non-practising Jewish family and was the fifth sibling of eight children.

The young Trotsky attended school in Odessa and it was here that he was immersed into a city with a more cosmopolitan outlook than he would have ever experienced in the rural parts of the Russian Empire. 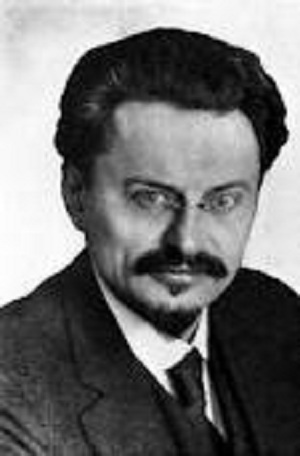 Although it is widely felt that his time in Odessa helped to shape his views, Leon Trotsky did not get involved in any political activity until he left school and moved to Nikolayev in 1896. Here he became embroiled in the study of Marxist theory and abandoned thoughts of a mathematics degree in order to follow the Marxist ideal.

Trotsky became involved in Union rallies and protests and his activities soon drew the attention of the Royalist Russian government. Ultimately, he was arrested along with over 200 other union members and spent two years in prison awaiting trial.

Trotsky spent his time in prison productively both from a personal and a political point of view. He married his first wife, fellow Marxist Aleksandra Lvovna Sokolovskaya and joined the newly formed Russian Social Democratic Labour Party.

Finally, he was exiled to Siberia but escaped in 1902, spending time in London amongst other places.

Over the course of the next few years, the political climate in Russia began to change dramatically and Trotsky became more involved in the fledgling revolutionary movements. In 1903, while he was still living abroad, his political party split into two factions and as Lenin took charge of the Bolsheviks, Trotsky assumed leadership of the minority Menshevik faction.

After the February 1917 revolution, the path was clear for Trotsky to return to Russia and on his arrival, he joined the Bolsheviks in spite of his disagreements with Lenin.

Trotsky helped to form Russias first socialist government and took the role of foreign commissar where his first task involved negotiating peace terms with the Germans.

Trotsky settled in to his role in government and he was not alone in seeing himself as Lenins heir apparent. However, he was an unpopular figure and when the leader fell ill and died, Stalin was chosen as successor and Trotsky faced up to a bleak future.

In 1927, Trotsky was thrown out of the party but as he continued to criticise Stalin, he was exiled once again. Finally, in 1936 he settled in Mexico but his feud with the Soviet Unions new leader was to catch up with him when, on 20th August 1940, Ramon Mercader, acting on direct orders from Stalin stabbed Trotsky with an ice pick, leaving him fatally wounded.