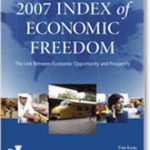 The Heritage Foundation have released their 2007 rankings of Economic Freedom, and it will make difficult reading for the Kremlin, as capitalist Russia apparently has a less free economy than communist China.

Out of 157 countries ranked, Russia places a rather dismal 120th, and 9 of the other 12 former Soviet states ranked higher – most by quite a long way.

I’ve been racking my brains to think of something positive to say about this for Russia, and about the only thing I can think of is: if Russia has the world’s 10th largest economy, but is this unfree… imagine what it could do if it took deregulation seriously.

Anyway, for completeness, the Former Soviet countries that rank above Russia are: