A group of Russian companies are sponsoring the £250,000 ($385,000) repair of HMS Belfast, a former Royal Navy light cruiser that now serves as a floating museum on the river Thames in London. 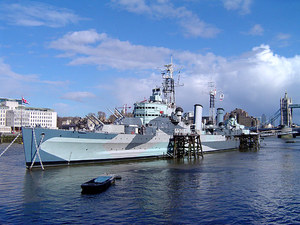 A group of Russian companies are sponsoring the £250,000 ($385,000) repair of HMS Belfast, a former Royal Navy light cruiser that now serves as a floating museum on the river Thames in London.

HMS Belfast saw service across the globe during the Second World War – notably it is the last surviving ship that took part in protecting the Arctic Convoys that delivered supplies to the Soviet Union under the Lend Lease programme. Decommissioned in the 1960s, HMS Belfast is now an iconic part of London’s River Thames – it is moored as a museum ship between London Bridge and Tower Bridge. If you’ve ever taken a trip along the river you will almost certainly have seen it.

However, it’s an ageing WW2 battle ship, and in need of fairly regular maintenance just to keep afloat. Most recently, corrosion on its two masts was discovered, requiring the replacement of both. The Imperial War Museum, which operates the HMS Belfast museum wasn’t able to find the funds for repairs, until Russian companies, aware of the PR value of repairing a ship that helped to support the Soviet war effort, stepped in to help.

The companies – OPK, Severstal and Sovcomflot – have offered to fund the full repair of the masts, and a crew of contractors are currently working on board the ship. The eleven contractors, all from St Petersburg, are expected to spend three weeks working on the repairs. Elena Kirichek, a paint specialist with over 30 years of experience of working on Soviet and Russian ships told reporters that:

“It’s very interesting to see this vessel being preserved for future generations. It has been an honour for us to make our own contribution to the preservation of this wonderful ship.”

According to the London Evening Standard Newspaper, half of the contractors taking part in the work have decided to sleep on board HMS Belfast, which marks the first time in nearly 50 years that her cabins have been used.