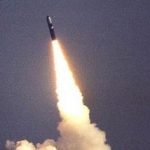 As you would expect, the western press – particularly in the UK – are muttering darkly about the new Cold War and a renewed arms race (see the Express and Guardian, for examples).

“As of today Russia has new missiles that are capable of overcoming any existing or future missile defence systems. In terms of defence and security, Russia can look calmly to the country’s future.”

As Russia now has an unbeatable nuclear deterrent we can clearly expect it to stop worrying about America’s piffling missle shield defences.

No, seriously, mark my words… from today onwards the Russian government won’t make a single complaint about the US missile defence bases in Eastern Europe.