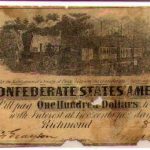 So, Putin’s coming to visit George W Bush in Kennebunkport this weekend, and his advance guard are in town, checking out the place.

Now, Kennebunkport isn’t the most exciting place to be if you’re a Russian Secret Service agent , and, well, you know how these Russians, they like their liquor:

A Russian man attempted to pass off a phony $100 bill at the New Hampshire State Liquor store shortly before 8 p.m. Thursday, according to the store manager, who said a cashier discovered the bill was bogus.

Fractures within the Russian opposition?