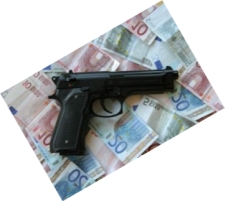 If you believe the rumours, Vladimir Putin has accumulated a personal fortune worth $40 billion dollars during his seven and a half years as President of Russia.

The allegations of Putin’s vast wealth come from Stanislav Belkovsky, described as a Russian political analyst by the Guardian. In an interview with them he claimed that Putin was worth:

“At least $40bn. Maximum we cannot know. I suspect there are some businesses I know nothing about…. It may be more. It may be much more.

Putin’s name doesn’t appear on any shareholders’ register, of course. There is a non-transparent scheme of successive ownership of offshore companies and funds. The final point is in Zug [in Switzerland] and Liechtenstein. Vladimir Putin should be the beneficiary owner.”

Belkovsky goes into more detail in the Telegraph, who report that:

According to Mr Belkovsky, Mr Putin controls a 37 per cent stake in Surgutneftegaz, an oil exploration company, as well as 4.5 per cent of Gazprom, the state energy giant, and at least 50 per cent of Gunvor, a Swiss-based oil trading company that has won a series of state contracts.

Not bad for seven years work.

Only one minor detail – Belkovsky doesn’t appear to have given any evidence whatsoever to back up his claims. Which makes it all the more surprising that, since they first surfaced in a book he published last year, his claims have been picked up by Die Welt, the Washington Post and the Guardian – and now are whizzing around the global media as semi-fact.

I wouldn’t be surprised if Putin hadn’t provided generously for his retirement and had a few hundred million, perhaps even a billion or two tucked away somewhere for a rainy day.

But, seriously – Vladimir Putin net worth is $40 billion??

Come on. How on earth does the leader of Europe’s biggest country, in one of the most high profile presidencies in the world, manage to become the world’s fourth richest man with absolutely nobody noticing? Not even Forbes…