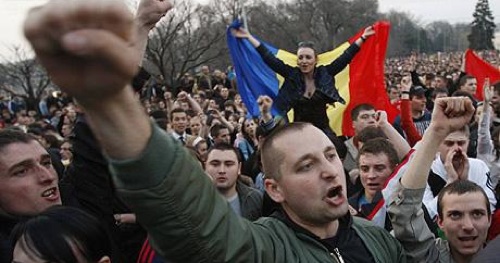 A 10,000 strong demonstration by (mostly) pro-Western, pro-Liberal protestors in Moldova has turned into an opportunistic storming of the Parliament building in Chisnau and the whiff of revolution is in the air.

The demonstrators were upset that the Communist Party appear to have just scraped past the 50% required to take complete control of Parliament and to elect the the country’s next President.  They claim that the result was rigged.

It’s far from clear what’s going on in Moldova at the moment, but it’s clear the situation is very out of control and pretty much everyone’s been caught on the hop. Although few think that Moldova’s Communist Party are above a certain level of electoral fraud, I don’t think anyone seriously believed that the election was a complete con. And, as a result, I think no-one expected anything more than the usual half-hearted protests from the losers.

So to see a full scale protest, complete with a ritual storming of Parliament, is quite a shock.

I’m going to stick my neck out, though, and predict that we’ll see a recount that gives the Communists less than 50%, and some kind of token coalition government with the opposition parties – perhaps they’ll even get to appoint a President.

If you really want to draw a parallel with the Orange Revolution, perhaps the best one is with the way the protest was organised, and spread like wildfire.

If you bothered  to check the most popular discussions on Twitter in the last 48 hours, you may have stumbled upon a weird threat of posts marked with a tag “#pman” (it’s currently listed in Twitter’s “Trending Topics” along with “Apple Store”, Eminem, and Easter).

No, “pman” is not short for “pacman”; it stands for “Piata Marii Adunari Nationale”, which is Romanian name for the biggest square in Chisinau, Moldova’s capital.

[…] The related posts on Twitter are being posted at a record-breaking rate – I’ve been watching the Twitter stream for the last 20 minutes – and I see almost 200 new Twitter messages marked with “pman” (virtually all of them in Romanian, with only one or two in English). In the last few hours there have also emerged several “smart” aggregators of posts on the subject, like this one – they have to contextualize what exactly is happening — and this one for YouTube videos. Many blog posts are also being updated in real-time – minute by minute – check this one. There are also a plenty of videos on YouTube and photos, including those uploaded to Facebook.

There are also a few moving English-language Twitter posts like this – “in #pman  a grenade thrown by the police has torn apart one of the protester’s leg”-  that would surely be perused by foreign journalists.

Twitter is certainly how I found out about today’s protests. But I do wonder how much Twitter has really been used to generate the protests. More likely, I think, it’s been used (and used brilliantly) to get the word out to people outside of Moldova, and to make the world sit up and take notice.

By the way – if you’re looking to keep tabs on events in Moldova, I recommend visiting the two hashtags (twitter search queries) and three users below:

You can view all of their updates without joining Twitter.