i Newspaper is launched today for just 20p. It’s the first pay newspaper to be launched in the UK since 1984.

Today sees the launch of i Newspaper, a brand new paper to the UK market. 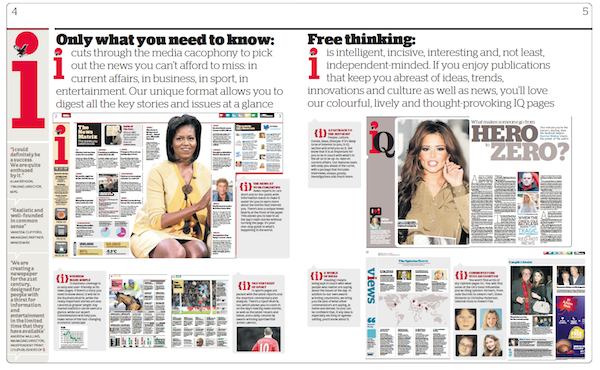 Why I am writing about the i newspaper launch on a blog about Russia, you ask? Because it’s the new initiative of Alexander Lebedev, a former KGB spy turned businessman, who now owns four of the UK’s biggest newspapers.

i (yes, they’re determinedly sticking to the lower case i popularized by Apple with their iPod/iPhone/iPad brand, although there’s no indication of whether there will be an iPaper app for the iPad) is described by itself as “a new paper…combines intelligence with brevity, and depth with speed of reading”. Basically, I think that means it’ll be a stripped down, sexed up version of it’s parent paper the Independent.

At a time when the paid newspaper market is shrinking rapidly (so rapidly that Lebedev bought one newspaper, the London Evening Standard, recently and turned it into a free newspaper), it’s a real gamble for Lebedev to launch a brand new newspaper, let alone one that people will have to pay money to read. Even though i will cost only 20p (that’s about 31 cents), it’s still going to be a challenge to persuade people to part with cold hard pennies in exchange for a brand new newspaper that they’ve never heard of.

Lebedev told the press that the i launch would be a milestone for the British press:

“I am very proud to launch i, which will be the first quality daily paper to have launched in Britain since The Independent itself in 1986. I believe that a free press is a fundamental tool of a democracy, and I believe that newspapers still have a future, and a very important one.”

I’ll keep an eye out at lunchtime to see if I can find a copy, and let you know if it’s is any good…