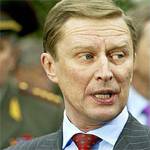 Sergei Ivanov, one of the two leading contenders to replace Vladimir Putin as President in 2008, has been promoted to First Deputy Prime Minister.

The move puts Ivanov on a par with Dmitri Medvedev, the other leading candidate who, until this morning, held a nominally higher government office than Ivanov. Promotion also means that Ivanov can leave behind the post of Defence Minister, and the possibility that further military abuse scandals could damage his political future.

Anyway, moving on – The Times reports that Putin has also promoted Sergei Naryshkin, his former Cabinet Chief of Staff, speculating that he may emerge as a dark horse candidate if Putin loses faith in Medvedev and Ivanov.

Personally, I wonder if Putin is actually trying to set up a close run election between two candidates he has faith in. This would allow Russia to claim that its Presidential election was truly competitive and democratic, unlike the rather one-sided elections of recent years.