Football: Inspired Russia come from behind to beat England 2-1

Russia stormed back from a goal down to beat England 2-1 in their Euro 2008 qualifying match.

England went ahead courtesy of an early Wayne Rooney goal and, with just over twenty minutes to play, had looked to be in control of the game and well on their way to the European Championships.  But, in an inspired move, coach Gus Hiddink brought Roman Pavluchenko onto the pitch – he went on to score both of Russia’s goals.

The result leaves Russia in control of their destiny – they need only to win their next two games against Israel and the not very mighty Andorra.  England, on the other hand, can only realistically qualify if they win their last match and Russia slip up.

England coach Steve McLaren has refused to blame England’s defeat on Russia’s decision to cover the pitch with artificial turf.  Instead, he went down the time honoured route of blaming the referee instead: 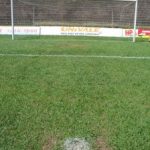 The pitch had nothing to do with it,” he said. It was lively. They had more preparation, but Im not making that an excuse.

…Ive just seen the penalty again. Its an absolute disgrace. Its outside the box. The linesman didnt give it. It was the referee [who awarded the penalty] from quite some distance [away]. Things like that turn games.”

The BBC on the other hand, have no doubts. Engand’s defeat can be blamed on Russian gamesmanship:

McClaren will have been peturbed to see the synthetic surface being heavily watered before kick-off, a move clearly designed to make conditions more favourable for Hiddink’s side.

It’s days like this that I try to forget I’m an Englishman.