The best cover I’ve seen from the Economist since their depiction of Kim Jong-Il as the Rocket Man.

Given the lack of hard evidence available to Russia watchers, their conclusion couldn’t be more accurate:

(Especially given how handy Putin looks with a petrol pump). 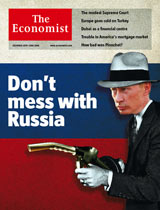 The Economist goes on to analyse the Litvinenko Murder. [T]he fact that people jumped to this conclusion [that the Kremlin was responsible for Litvineko’s death] says much about the image created by Mr Putin’s capricious seven-year presidency…

It would not be fair to conclude from any of this that the Kremlin is guilty as charged. But it all amounts to yet another sign that the hopes entertained in the West about Mr Putin when he first took officethat he actually meant what he then said about democracy, and that under his rule Russia could conceivably become a normal countrywere misplaced. There have been many such signs, from barbarity in the north Caucasus to harassment of foreign oil firms and meddlesome foreign policy. But perhaps none has publicised the murk and cruelty of life in Russia so effectively as the mysterious death of an unimportant man.