CSTO slams door on US bases in Central Asia

The Collective Security Treaty Organisation (CSTO) today announced that no-one will be able to establish military bases on the territory of a CSTO member state without the express agreement of all other member states.

In practice, this is a setback for the United States, who will find it next to impossible to establish a new base in Central Asia once the lease on the Manas airbase in Kyrgyzstan expires in 2014, and a boost to Russia who, as a CSTO member state, has a veto on the construction of future bases.

The decision was taken at a meeting of all seven CSTO members – Russia, Armenia, Belarus, Kazakhstan, Kyrgyzstan, Tajikistan and Uzbekistan. Announcing the news, Kazakh President Nursultan Nazarbayev told reporters that: 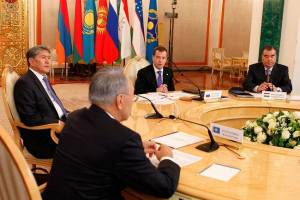 “An accord has been reached to coordinate the deployment, in the territory of the CSTO states, of military infrastructure facilities belonging to non-CSTO states.

In order to deploy military bases of a third country in the territory of the CSTO member-states, it is necessary to obtain the official consent of all its members.”

The move was swiftly followed, in an official statement, by criticism NATO-led interventions, particularly in Libya and Afghanistan, and condemnation of the United States proposals to site a missile shield in Europe.

“The unilateral deployment of strategic missile defense systems by one state or a group of states without due account for the lawful interests of other countries and without extending legally-binding guarantees to the latter may damage international security and strategic stability in Europe and the world as a whole.”

Agreement was also reached on an armanent programme for the CSTO’s rapid re-action force, which may finally become something slightly more than a paper tiger. You can read more about the meeting, including transcripts of all the opening speeches, at the Russian President’s website.

Most interesting, though, was the criticism of the United States and NATO. The sentiments of the strongly worded statement are identical to Russia’s foreign policy positions, and this will do little to dampen criticism that the CSTO is essentially an organisation controlled entirely by Russia.

And it is certainly interesting to see how comfortable the other six member states are in aligning themselves with Russia and agreeing such a strong statement. It seems clear that the US has been squeezed to the sidelines by Russia in the battle for influence in Central Asia.