Two British RAF Tornados were scrambled last month to intercept a two Russian Tupolev Tu-142 (Bear) bombers just off the Scottish coast last month, it has emerged. And here’s the picture to prove it: 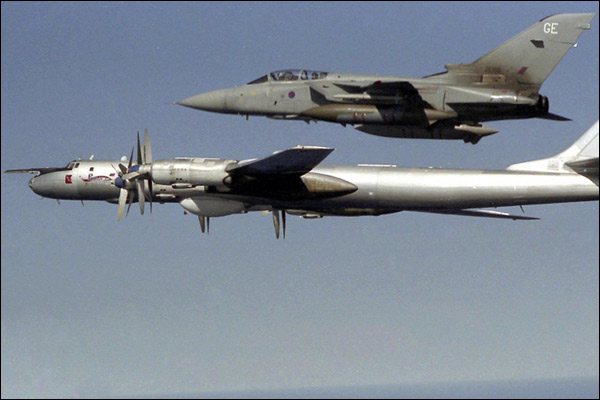 It seems as though the Russian planes had taken a trip out to watch the Royal Navy’s recent live firing exercise, Operation Neptune Warrior, but were persuaded to turn around as the RAF Tornados flew alongside.

The British press is, rather predictably, reporting in rather gung-ho fashion, harking back to the Cold War era. The Sun quotes Squadron Leader Keith Wardlaw:

“The Russians obviously thought it might be worth having a look and taking some photos. Its a throwback to the Cold War when they used to fly in to test our reaction times.

Its normal to let such aircraft know we are there by pulling up alongside and they left quietly.

Paul Jackson, of Janes All The Worlds Aircraft, said: All the RAF are doing is telling them, We could do this for real if we wanted to, so go and tell your mates back home.

Paul Jackson, the editor of Jane’s Almanac brought a bit of contextual sense to the reporting, but even he couldn’t resist a bit of posturing:

This aircraft dates back to the 1950s and although the air-frame might look dated it is still highly effective in terms of long-range maritime reconnaissance.

“The exercise was in international waters and the Russians have got as much right to be there as we have. We do it to them, they do it to us.

“All the RAF did was to tell them, ‘We could do this for real if we wanted’.”

Almost half of Russians think election will be fixed