Fancy owning one of the most important pieces of Soviet space memorabilia to come on the market for decades? Well, if you have a few million dollars to spare, you’re in luck!

“Not only are there no other examples outside of Russia of the world’s first spacecraft, this capsule was pivotal in space history as providing the green light for Gagarin’s spectacular achievement” (David Redden, Southeby’s Vice Chairman) 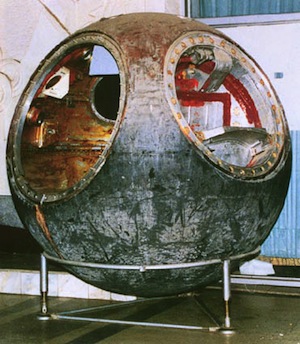 The Vostok 3KA capsule has a fascinating history. 3KA-2 was the second of eight capsules launched into space. As a test run for 3KA-3, Gagarin’s capsule, it contained a life sized human model (named Ivan Ivanovich) and a live dog, named Zvezdochka (Wikipedia says this means Little Star, but I think I prefer Star Daughter – my Russian translation’s not so hot, though, so…). Happily the capsule returned to earth in one piece and, although poor old Ivan was ejected from the capsule, Zvezdochka stayed inside the capsule until landing and was recovered safely.

Sotehby’s estimate that the sale will fetch its private owner between $2 and $10 million, which for some might be a steal. I wonder if a Russian oligarch will step in and return the capsule to Russia?

The auction will take place on 12th April 2011, timed to coincide with the 50th anniversary of Gagarin’s first spaceflight. You can find out more about Gagarin’s flight at the YuriGagarin50.org website, or check out the Yuri Gagarin anniversary twitter feed.