Turkmenistan is one of the more obscure countries that once formed the mighty Soviet Union. As a country, little is known of Turkmenistan beyond its borders and in the west, news reports have been largely confined to stories surrounding the eccentric behaviour of former dictator Saparmurat Niyazov.

So where is Turkmenistan and how much do we really know?

Turkmenistan is located in Central Asia and is the smallest of the five republics here that found themselves under Soviet rule for much of the 20th century. The Caspian Sea lies on its eastern side while the country shares borders with Iran to the south, Uzbekistan to the north and Kazakhstan on its western edge.

Turkmenistan has a population of around five million people and its total surface area equates to around half a million square kilometres. That is a relatively large country with a sparse population but why is that the case?

The vast majority of Turkmenistan’s land mass is made up by desert. The Karakum Desert covers almost the entire country and as such, much of Turkmenistan is uninhabitable. Despite this harsh terrain, the country is rich in natural gas deposits and that contributes greatly to the nation’s productivity.

As far as reserves go, Turkmenistan is the fifth largest provider of natural gas in the world yet the vast majority of its people still live in poverty.

The cult of personality

Turkmenistan, along with North Korea, is one of only two Stalinist states in the world and in recent years it has had to endure the rule of a man who many claim to be the craziest dictator that ever lived. Saparmurat Niyazov took the cult of personality to new extremes and called himself Turkmenbashi – father of all Turkmenistan – in the process. 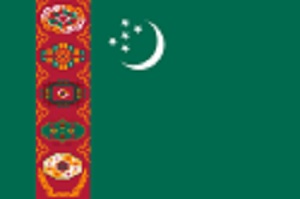 When you think about what had gone before him, for Niyazov to be called the world’s craziest dictator is some achievement but there are many ways in which Turkmenbashi truly deserves this accolade. His fabled exploits include commissioning the gold statue that still exists in the capital Ashgabat. Having a gold statue is a true mark of an egomaniac but this one actually revolves so that it is always facing the sun.

The full and bizarre list of behaviour is too long to recount in full here but citizens were ordered to remove their gold teeth and men were banned from listening to car radios.

Despite this strange backdrop, tourism is welcomed in Turkmenistan but in return to the days of the old Soviet Union, political discussion should be avoided at all times.

The capital Ashgabat is a fascinating location with a number of monuments to see including the tallest free standing flagpole in the world and a host of interesting museums.

Turkmenistan is also home to some natural wonders including the desert and the Yangkala Canyon.

So when you ask the question where is Turkmenistan, you now know the answer. The country may not be top of many tourist lists but this fascinating location is one that needs further exploration.