While Russian citizens may have embraced many external culinary influences in the last twenty years, their traditional cuisine has happily endured.

Centuries of history aren’t thrown away lightly and those who have grown up on authentic national dishes have passed on their knowledge and passion to the new generation of Russian citizens.

Russian traditional food has a reputation for being hearty and warming in order to give energy and insulation to those in the remotest parts of the Russian territory. For once, this general assumption of Russia is largely true and dining tables across the land are laden with dishes of this kind.

Ask anyone outside of Russia to name a typical national dish and chances are they may say beetroot or cabbage soup.

Borcsh is the beetroot soup in question which, if you’re cooking it traditionally, will also contain meat and sour cream as the main ingredients. Cabbage soup, or shchi is arguably the most popular historical dish which uses cabbage at its heart, along with potatoes and other vegetables. Shchi has a naturally sour taste but as an alternative, some Russians will enhance that flavour by replacing the traditional cabbage with sauerkraut. 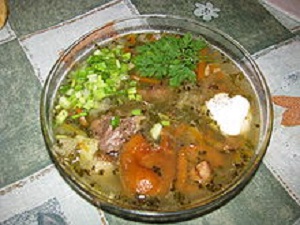 As a whole, soups form a major staple for most Russian households with fish, noodle, chicken and other varieties competing alongside the better known dishes.

Hearty and rustic cuisine forms the basis of main dishes across the country with meat and vegetables providing the energy and ballast that any Russian needs.

Traditional meals would include Pelmeny, which is chopped and shaped meat covered and wrapped in a thin dough or Kholodets, which are jellied pieces of pork, fried and served with vegetables. Like many Eastern European countries, Russia uses offal extensively and Kholodets is a good example of a dish where liver, pigs head, trotters and other parts of the body are used.

As a country, Russia is abundant in marine life and there is a wide choice of fish dishes on a traditional Russian menu. Freshwater fish in particular are widely eaten and you can expect to find carp right across Russia.

Sturgeon, Zander, Pike, Salmon and Trout are other popular species and don’t forget Russia’s most famous delicacy – the rare Sturgeon eggs that make delicious and in some cases, immensely expensive caviar.

It would probably to be fair to claim that Russia’s most famous dessert dish is Bliny. The little pancakes that are served with sour cream, honey or jam are one of the few dishes to make an impact outside of the country.

In addition, pastries, cottage cheese and other forms of pancake are popular at the end of a meal.

Many of the traditional Russian food listed here has generally remained in the country but there are a few dishes that have spread to Western Europe and beyond.

Aside from Bliny, Chicken Kiev and Beef Stroganoff are claimed by the Russian Empire but in many ways it’s a shame that other culinary treasures have yet to make their mark on a global scale.