While many countries from the former Soviet Union have become more widely known to the outside world, others are still shrouded in mystery to some extent.

Belarus is one of those countries that we know relatively little about in comparison say to Russia or the Ukraine so where is Belarus exactly and what is there to learn about this fascinating country?

Belarus is located in Eastern Europe and can be found on the western tip of Russia. It is a landlocked country and in addition to Russia, it shares borders with Poland, Lithuania, Latvia and the Ukraine.

This is a large country in terms of area but because some 40% of the land is covered in dense forest, it is relatively sparsely populated.

The chief industries of Belarus are mining and agriculture and this is also a major manufacturing location with a thriving export trade in many different products.

Like many neighbouring countries, Belarus has endured a bleak history at times and right up until the 20th century, the land here had been owned by many other nations.

After the fall of the Soviet Union in 1991, Belarus declared independence and has continued to thrive with its own identity ever since but of all the dark periods in the country’s history, the mid 20th century was perhaps the most tortuous.

Like many countries of the Soviet Union, the people of Belarus suffered under the cruel leadership of Stalin but in World War II, they sustained catastrophic losses.

Belarus was literally devastated and it lost around a third of its people along with around half of its economic resources. The resilience of its people carried Belarus through the post war years and into a long awaited independence.

The capital of Belarus is Minsk and it is by far the most popular destination from a tourist point of view. Belarus as a whole has been a little slow in capturing the tourist trade in the way that some neighbouring countries have but there is still much to see and do here. 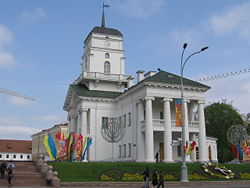 There are many museums and galleries in Minsk that pay homage to the nation’s long history but one of the most popular tourist attractions is a little more curious. The former residence of Lee Harvey Oswald can be found here and a significant section of visitors come to seek out the home of the man who assassinated JFK.

Other main cities in Belarus include Brest, Gomel, Grodno, Mogilev and Vitebsk.

So the next time anyone asks you where is Belarus, you will know a little more about this interesting nation. To find out more, the best way is to join the small, but growing band of tourists who are heading to the country and learning all they need to know at first hand.