Like many countries across the former Soviet Union, the Ukraine has become immensely popular with foreign tourists. This is a country rich in history and all across the nation, there is some fascinating architecture.

Below is a list of the most famous Ukraine landmarks, many of which are a ‘must see’ if you’re planning a journey here.

Kiev is a logical place to begin your tour of the Ukraine and locals and tourists alike would suggest that the Pechersk Lavra is the most spectacular monument here. This is an ancient orthodox Christian Monastery and its ornate design dominates the city skyline.

Elsewhere in the city, a sobering reminder of a tragic past exists at Bykivnia where the Bykivnia graves exist as a memorial to the many who died at the hands of the NKVD during Stalin’s regime. Estimates vary but it’s though that up to 200,000 bodies may be buried here.

The most striking landmark here however must be the mighty Mother Motherland statue. The titanium monument forms part of the museum of the Great Patriotic War and it stands some 62 metres, (203 feet) tall and it commemorates the fallen victims of the conflict. 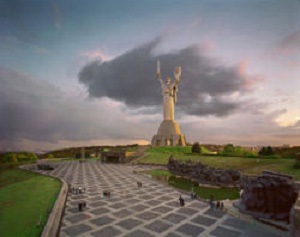 Elsewhere in the country’s capital, visitors can enjoy St Sophia’s Cathedral and St. Michael’s Golden-Domed Monastery among others.

Odessa’s location on the shores of the Black Sea makes it an ideal destination for tourists and it has its own fair share of notable landmarks. The most famous of these is undoubtedly the Potemkin steps which are well known worldwide thanks to their appearance in the film Battleship Potempkin.

Constructed in the mid 19th century, the steps feature a curious optical illusion depending on where you view them from and they are regarded by locals as the entrance to the city from the sea.

Of the other monuments in Odessa, the Opera and Ballet theatre is another example of some spectacular architecture that can be found across the city.

Unlike some of the other cities in the Ukraine, tourism has been a little slow to take off in Donetsk. In comparison with Kiev or Odessa, there is certainly less to see but that doesn’t mean to say that a trip to this fine city will leave you feeling disappointed.

This is essentially an industrial city but the Pushkin Boulevard is a beautiful walkway that could fool you into believing that you were in the heart of the countryside. Elsewhere, the Czar Cannon and the Shevchenko monument are well worth seeing on your trip to Donetsk.

One of the most fascinating monuments in the Ukraine can be found traversing the entire country. The Serpents Wall is an ancient system of fortifications which run the entire length of the Ukraine from Zmiiv in the east to Podolia in the west.

Dated between 2 BC and 7 AD, nobody knows quite who was meant to be kept at bay but large areas of the wall remain in excellent condition for any visitor to enjoy.

These are just some of the many wonderful Ukraine landmarks and if you’ve got a taste for travel, a trip to the Ukraine can unveil many more wonders right across this fine country.