Perhaps more than any other country, Russia has a rich and fascinating history and this extends right back through the centuries. At one time, much of the country formed just part of the sprawling Mongol Empire and that situation continued for many years until the empire fell in the second half of the 14th century.

But what influence, if any, has that period had on modern Russia and what do we know about Mongols in Russia today?

The Mongol Empire was, quite simply, the biggest land empire ever known and it comfortably eclipsed the Romans by a considerable margin. This isn’t surprising however when you take into account the fact that a vast area of Russia, the largest country in the world formed part of the Empire which was in existence from 1206 to 1368.

The Empire itself had its origin with the most feared leader in history, a certain Genghis Khan. Khan unified the Mongol and Turkic tribes and set about his own take on world domination at the beginning of the 13th century.

In 1218, Genghis Khan turned his attentions away from an attack on China and set about driving through other parts of Asia and Eastern Europe. Without exception, the invading hordes met with only token resistance as his mighty army laid waste to entire towns and villages as they progressed. 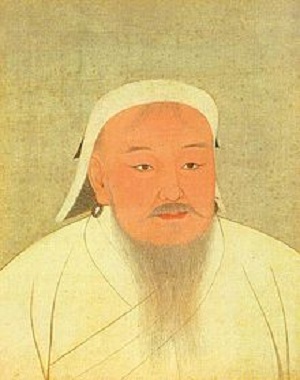 Essentially, they were a ruthless and undefeatable foe and so it proved when they first entered Russian in early 1219. The first parties made their way into Kievan Rus and at first, Russian nobility sought a peaceful solution. Mongol envoys requested peace from Russian Princes but in an air of mistrust, Russians had the Mongol delegation killed.

This was a reckless act that clearly underestimated the might of Genghis Khan and the Mongol invading forces. A full scale onslaught was launched which devastated parts of South Western Russia which in turn was overwhelmed by what was happening.

Monasteries and churches were laid to waste as the Mongols claimed that they were sent by God to do his work. In turn, Russians believed this too and many felt that God had indeed despatched the Mongols to punish them for their sins.

Occupation and the end of the Mongol Empire

The Mongols progressed and eventually occupied much of the South of Russia. Moscow crucially fell in 1322 allowing the Mongols to dominate the country.

By this time however, the once mighty Empire was beginning to fragment and implode. Eventually, Russian returned to home rule and while the Mongol Empire has vanished from the land, many of its descendants remain.

As far as Mongols in Russia are concerned, the present day sees their descendants the Tatars comprise a significant ethnic group. Historically the Tatars are a Turkic race and their total population is measured at around 7 million.

Around 5.5 million Tatars currently live in the Russian Federation, and in doing so they mark a clear legacy of the Mongol invasion that took place nearly eight hundred years ago.