The name Tupolev Concorde is a colloquialism coined for Russias first and only supersonic airliner which briefly made an impact on the world stage in the 1960s and 1970s. The correct term for this incredible aircraft was the Tupolev 144 which promised much but sadly suffered a sharp decline, largely as a result of one very high profile air disaster.

The race to build the first commercial, supersonic passenger airliner between Russia and the joint Concorde operation of France and the UK was a fascinating part of the Cold War which was largely overshadowed by the Space Race.

While the battle to put the first man on the moon dominated media stories in the late 1960s, the development of two similar aeroplanes in the East and in the West was relatively ignored by the Worlds Press.

The famous Tupolev aircraft manufacturing firm first unveiled the designs for a new supersonic airliner back in January 1962. There followed six years of intense work before the finished Tupolev was unveiled in 1968. 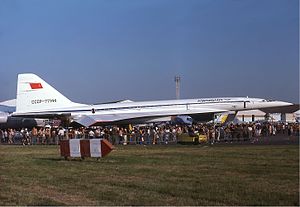 The Tupolev 144 was instantly dubbed the Tupolev Concorde or Concordski in view of its similarity to the Anglo-French development and it was felt for some time that Soviet espionage was responsible for discovering plans and documents in the west that aided the Tupolevs construction.

The very first prototype 144 took its maiden flight on 31st of December 1968, thereby beating Concorde into the air by two months. It continued to set records in the following year too as it first broke the sound barrier in June 1969 before becoming the first commercial airliner to fly in excess of Mach 2 the following month.

Although the 144 was similar in looks to Concorde, there were some major differences in the aircrafts construction. In particular, the Tupolev version was considered to be inferior to its Western counterpart in terms of the engine and braking systems but it was far superior when it came to pure aerodynamics.

In 1973, the Tupolev 144 appeared at the Paris Air Show but the event was to end in tragedy. On the 3rd June, the aircraft took to the sky but shortly entered a violent downward fall before crashing into neighbouring houses, killing all six crew members and eight more on the ground.

The reasons for the disaster have been mired in controversy ever since and the Soviets claimed initially that the aircraft was avoiding a French Mirage jet that was monitoring its flight. Whatever the cause of the crash may have been, the future of the Tupolev Concorde was never the same.

The 144 continued active service but rising costs were one of the reasons behind its ultimate demise. Its final passenger flight took place on 01st June 1978 and the TU-144 programme was officially cancelled five years later by the Soviet government.

While some aircraft remain in storage, there have been attempts to resurrect the Tupolev Concorde, all of which have been doomed to failure thus far.

There has been a suggestion that the aircraft could make one final flight as part of the opening ceremony at the 2014 Sochi Winter Olympics but this too is unlikely. Ultimately, it seems that this incredible feat of Soviet engineering will never take to the skies again.