The Tupolev 334 was intended to be a short to medium haul airliner capable of transporting just over 100 passengers to various destinations. Its specifications meant that it had the capacity to be a shining star in the manufacturers fleet but instead, it was scrapped after a costly exercise.

The purpose of the Tupolev 334 was to replace an ageing fleet of Yak 42s and TU 134s that were still in active service with many airlines across the world. The new aircraft was sleeker, quieter and more efficient than its predecessors and a much needed addition to many fleets.

The original design concept was based to a certain extent on the Tupolev 204, a larger airliner carrying twice the amount of passengers. The new design was based on a shortened 204 fuselage but the most distinctive difference came with a new T Tail and engines mounted on either side of the rear fuselage itself. 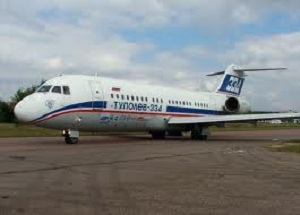 The TU 334 was intended to provide as comfortable a flight as possible at a time when short haul flights were becoming notorious for cramped aircraft and joyless journeys. As such, the first criteria of Tupolevs specification was a high comfort level for all its passengers.

Legroom was to be increased and noise levels reduced with more overhead space being provided at the same time. While this wasnt exactly a unique selling point, many short haul passengers would have experienced greater comfort than they may have been used to on other flights.

The final capacity was 102 passengers and the aircraft had a range of 3150 kilometres, coupled with a cruising speed of 8200 kilometres per hour.

The concept for the 334 was first mooted in the final days of the Soviet Union and work duly began in the early 1990s. Almost immediately however, the project ran into budget problems as the economic crisis of the post Soviet era began to bite.

As a result, a prototype 334 was first displayed in 1995 but this was essentially just a shell and the first flight for the new airliner was another four years away. Finally, on 8th February 1999, the Tupolev 334 first took to the skies and arrangements were put in place for production to begin.

At the end of 2003, production began in earnest as a collaboration between Tupolev and MiG. Funding issues were never far away however and they continued to slow development in those early years.

By 2006, firm orders for the 334 had been received from seven airlines with letters of intent arriving from an additional 24 carriers. The future looked bright indeed but financial problems were to have a final say.

By 2009, there were orders from 100 airlines but by that point, the project was years behind schedule and only two aircraft had been built at considerable expense. The 334 came under the review system carried out by the rationalisation of the Russian aircraft companies and the whole project was scrapped.

The Tupolev 334 could have been an impressive aircraft but external factors mean that it will never see active service.