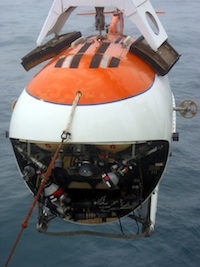 Russian media are reporting that the Mir-2 Russian Mini-Submarine may have discovered a treasure trove of the Tsar’s gold, buried at the bottom of Lake Baikal. RIA Novosti reports that:

“…the Mir-2 submersible found “shiny metal objects” resembling gold bullion some 400 meters below the surface near Cape Tolsty. Explorers attempted to grab them with the mini-sub’s manipulator arm but failed to due to the crumbling gravel on the lake bed.”

The location of the find has been logged though, so I doubt it will be long before the submarine’s crew head back for another attempt to retrieve some of the gold/shiny metal objects.

During the Russian Revolution and subsequent Russian Civil War huge quantities of the former Tsar’s fortune went missing across Russia. More than 1,600 tonnes of gold was allegedly in the possession of White leader Admiral Kolchak, and legend has it that the gold was lost as his men tried to transport it across a frozen Lake Baikal.

One version of the story is that his men lost their way as they tried to navigate the ice, and froze to death. When the ice melted, of course, the gold sank into the lake’s deep waters.

The more widely accepted version of events is that the gold was being transported across the frozen lake in a train (after all, 1,600 tonnes is a lot to carry!). This isn’t quite as fanciful an idea as it sounds – the ice on Baikal is very thick during the winter and it was quite common for temporary rail lines to be laid across the ice, particularly during times of war. However, occasionally, the ice would collapse under the weight of a train, leading to disaster, and it appears that this may be what happened to one of Kolchak’s trains.

Until now, the stories of lost gold at the bottom of Lake Baikal have been little more than legends. Sceptics have been quite sensibly telling people for years that the gold was probably shipped over to Japan and used to buy military equipment to support the White armies in their Russian Civil War fight against the Red Army. But their version of the tale has been dealt a blow by the Mir submarine’s discovery.