With no natural predators in its own habitat, the Siberian Tiger, like many animals on the endangered list has largely been put there by man. As either a direct or indirect consequence of mans actions, this magnificent animal was thought by many to have been driven to the brink of extinction in the mid 1980s and although numbers have increased since this dark point, the Siberian Tiger remains firmly on the endangered list.

Current estimates may vary depending on which reports you read but it is generally accepted that there are between 350 and 450 Siberian Tigers living in the wild. Although these figures have increased slightly, they remain worryingly small and there is still a real threat that the animal could one day become extinct.

In addition, around 90% of the population can be found in the Sikhote Alin mountain region of Siberia and with little or no movement beyond this area, the Tigers are effectively a sitting target for a number of poachers. 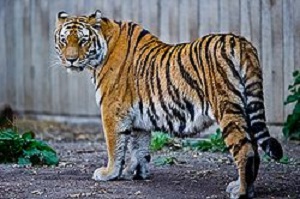 Sadly, Tiger bone has been used in Chinese medicine for centuries and although this practice was effectively outlawed in 1993, a huge black market still exists in the trade for Siberian Tiger parts.

In the mid 1980s when the Soviet Union was heading for its ultimate collapse, corrupt forestry officials were believed to have accepted bribes in return for turning a blind eye to widespread tiger poaching. This was the stage where the animal came closest to being completely wiped out and although they have since recovered, poaching remains a major concern.

While body parts represent a huge area of black market trade, the tiger fur is another big draw for unscrupulous poachers.

With a single tiger fetching around $50k on the black market, the threat from poaching just wont go away.

Widespread logging and deforestation are also contributing to the fall in the tiger population and this has grown to become a huge problem in Siberia. The tiger needs vast forest landscapes in order to survive and this is why it has historically thrived across the Siberian region and beyond.

Today however, legal and illegal logging has a two-pronged impact on the tiger because it is not only losing its natural environment, the increase in logging roads through its restricted habitat is now giving easy access to poachers, intent on reducing its population even further.

At one point, the Siberian Tiger population extended far beyond the mountain region where it now resides and it could be found across North Eastern China, the Korean Peninsula and right into Mongolia. Today, it is a far different story and this tiny crop of tigers are listed by the World Wildlife Fund as being critically endangered.

So when you ask why are Siberian Tigers endangered you now know the answer and one day they may well disappear for good. Captive breeding programmes continue and although they are successful, Siberian Tigers in the wild remain under constant threat in many areas.