Siberia has a long history of producing Russian diamonds. Diamond mining actually came to Russia quite late, because it wasn’t profitable to mine diamonds in large quantities throughout much of Russia’s history. However, when the Soviet Union decided in the 1940s that diamonds were essential for it’s rapidly growing post-war industry, the decision was made to throw the full weight of the Soviet machine behind diamond mining. Unsurprisingly, the Soviet leadership soon discovered that there was an insatiable demand in the outside world for diamonds, and that it could sell them for a lot of money abroad. It soon agreed a deal to secretly sell diamonds to De Beers, allowing them to continue to control the world market. By the late 1960s, diamonds brought in more foreign income than any other Soviet export. 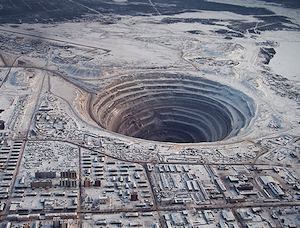 For many many years, most Russian diamond was mined from the world famous Miry Diamond Mine, which was first discovered in 1955 by Soviet geologist Yuri Khabardin. This mine is famous for being the world’s deepest mine, let alone the world’s deepest diamond mine. You will no doubt have seen pictures of this mine circulating via ‘viral’ email, or on websites that chronicle the fantastic.

As you can see from the picture here, the Mirny mine was truly massive. It is 525 meters deep, and has a diameter of 1.2 kilometres. The open mine was closed in June 2001, after 44 years of operation, but enough diamond mining continues in underground tunnels to last, it is estimated, until beyond 2030.

Siberian diamond mining today remains concentrated in Yakutia, a region of north-central Siberia also known as the Republic of Sakha. Today, over 20% of the world’s diamonds come from this one Siberian region. Some of the main mines in operation today include the Udachny Mine, which is inside the Arctic Circle, and the Anabar Mine, where it is so cold that mining ceases entirely during the winter.

The Kursk was one of Russia’s most advanced submarines so it was a shock as well as a complete tragedy when the vessel was shattered by an explosion that was to cost 118 lives. The events of that day, back in August...