Some facts about famous Russian diamonds, including the Orlov diamond which can be viewed in the Kremlin 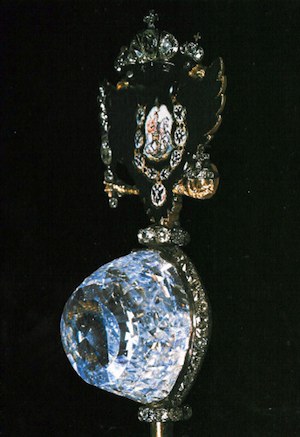 Around one in every five diamonds mined in the world today comes from Russia. But, oddly enough, Russia’s history of exporting diamonds is actually fairly recent. Historically, Russia used to be an importer of diamonds, rather than an exporter.

So, if you look at the famous collection of Russian diamonds in the Kremlin (these are all held in what is known as the Diamond Fund), almost all of the diamonds on display are from outside of Russia.

The Orlov Diamond (pictured, sometimes called the Orloff diamond) for example, is from India. Approximately 190 carats in weight, its exact origin is not known, but according to legend it was once an eye in a larger statue in a Southern Indian temple. It was apparently stolen by a French deserter in the mid eighteenth century and, after many years of travel throughout Europe, the diamond was bought by a Russian Count called Grigory Orlov. Orlov offered the diamond to Catherine the Great, Empress of Russia, in an attempt to win back her love.

Other famous diamonds in the Diamond Fund collection include the Shah diamond, from Persia, which is 88.7 carats, and the Red Spinel, a 398 carat diamond from China that forms a part of the Imperial Crown of Russia.

Today, most Russian diamonds are exported, and cut outside of Russia. Contrary to popular belief, few diamonds are mined in the massive Mirny Mine (the world’s deepest diamond mine, located on the outskirts of the Siberian city of Mirna) these days, but most Rusisan diamond production remains nearby, in the mines of Yakutsk, Siberia (which is why some people will try to tell you that there is no such thing as Russian diamonds – only Siberian diamonds).

Russia is an enthusiastic participant (some say leader) in a modern day diamond cartel, and happily admits to stockpiling diamonds to ensure that diamonds remain relatively scarce on the world market and, as a result, the price of diamonds remains high.