History and facts about the Shah Diamond, currently in the Moscow Kremlin 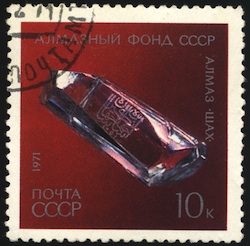 The Shah Diamond (sometimes also called the Diamond Shah) is one of the two most famous diamonds on display in the Moscow Kremlin.

The Shah Diamond is a 3 centimeter long, 88.7 carat yellow diamond of exceptional clarity. It was originally found in the Golconda mine in Central India – the exact date of its discovery is unknown, but experts date it to the mid 1450s.

Soon after it was found it was given the the Shah of Ahmadnagar, where it stayed for over 100 years. In 1591, the Shah at the time (Nizam) had a carving made on one of the diamond’s facets. Ever a modest man, the carving said ‘Burhan-Nizam-Shah Second. Year 1000’. The diamond was seized by the the Mogul Akbar later that same year, and his grandson later added a second inscription – ‘The son of Jehangir-Shah Jehan-Shah. Year 1501’. At some point, a small groove was cut in the diamond, so that it could be worn around the neck.

The diamond was seized again in 1738 by Nadir Shah. He took the stone back to Persia, where he added a third inscription – ‘The ruler of the Kadgar-Fath ali-shah Sultan. Year 1242.’

The Shah Diamond remained in Persia for almost a century until the murder of a Russian diplomat in Tehran led to it being presented as a gift to the Russian Tsar, in order to assuage Russian calls for the perpetrators of the murder to be punished.

Since then, the Shah Diamond has been one of the centrepieces of the Russian Diamond exhibition in the Kremlin, alongside other famous diamonds such as the Orlov Diamond (also known as the Orloff diamond) and a multitude of other Russian diamonds.

The picture at in this article is of a Soviet stamp from 1971 which bears a picture of the Shah Diamond. The stamp, at 10 kopeks, is worth considerably less than the diamond.