On a snow covered Krasnoyarsk pitch, Georgia ground out an 18-12 victory over Russia to secure the European Nations Cup title. 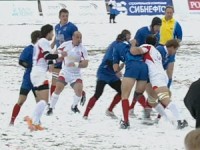 Georgia ground out a hard fought (literally, at times) 18-12 victory over Russia in Krasnoyarsk in the Rugby Union European Nations Cup title decider.

Although each team still has one game to play, Georgia have now pulled two points clear of Russia. Georgia’s stronger record in head to head matches between the two teams ensures that they will be crowned European Nations Cup champions for 2008.

A match report and video highlights of the game are below.

On a snow covered Krasnoyarsk pitch, the Georgian Lelos roared into an early lead.

Otar Barkalaia was rather fortunate to score under the posts after just 7 minutes but, after converting his own try and following up with a penalty on the 20 minute mark he had almost single-handedly given Georgia a 10-0 lead.

Russia, as seems traditional, ground their way back into the game with four penalties from the boot of Yuri Kushnariov. His fourth kick after 68 minutes brought Russia back to within a point of the Lelos. With the momentum and in front of their passionate home crowd, it would have been hard to bet against the Bears at this point.

But David Katcharava had other ideas. Picking up a quick pass from Lasha Malaghuradze, the winger flew past the Russian defence from 15 yards out to score the winning points.

Russia, roared on by their home crowd, threw everything at Georgia in the last few minutes, but despite battering the Georgian try line, they were unable to quite push their way over.

By all accounts, the match was an ill-tempered one. Two massive brawls scarred the game. A free for all late in the second half led to both number 6s being sin-binned. (Although, according to the Georgian Rugby Union reporter, both players then sat side by side in the sin bin, wrapped in blankets and chatting amiably). And, Georgia’s winning try led to a second brawl and a trip to the sin bin for Georgian prop Goderdzi Shvelidze.

For your voyeuristic entertainment, here’s the first brawl in all its glory:

Regardless of the result, the match has provided a tremendous boost for Russian rugby. The match itself was covered live on NTV-Sports, and will have introduced the game to many new fans.

And, after a strong Nations Cup campaign which has seen the Bears rise to 16th in the world rankings, Russia will be looking forward to a series of further high profile matches over the summer.

Most importantly, Russia will be playing in the IRB Nations Cup tournament in Romania this June. The annual tournament was set up in 2006 to give tier 2 nations the opportunity to test themselves against a higher level of competition than they would normally meet in regional competition.

Russia avoided Georgia in the group draw, and will open the tournaments with matches against Italy A, Romania and Uraguay. Georgia, on the other hand, face the much tougher proposition of matches against Uraguay, the Emerging Springboks (South Africa B) and Italy B.

The top 4 teams from the group stages will progress to the Semi-Finals and, from the fixture list, it looks as though Russia have a pretty good shot.

Russia have also had a fairly good season in Sevens, the lighter form of the game. They won the Bowl tournament in the Hong Kong Sevens a few weeks ago, coming from behind to beat Zimbabwe 19-14.

They’ll be looking to build on this success in the upcoming tournaments in Scotland (where, incidentally, Moldova will be playing for the first time) and England.