Although thrust very openly into the public eye, little is known about the wife of Russia’s former President and current Prime Minister.

Raisa Gorbachev aside, Russian political wives tend to keep a lower profile so how much do we actually know about the country’s ‘First Lady’?

Lyudmila Aleksandrovna Shkrebneva was born in Kalingrad on the 6th of January 1958 and attended the local Kalingrad Secondary School.

Having finished her education, Lyudmilla worked for Aeroflot as a flight attendant but as a graduate in Spanish and Philology from Leningrad State University, she taught there for many years.

Lyudmila married Vladimir Putin on July 28th 1983 and together they have two children: Maria, born in 1985 and Yekaterina, born in 1986.

In keeping with strict Russian protocol, Lyudmila Putin keeps a very low profile and for that reason, relatively little is known about her early life.

Since her marriage and her husband’s subsequent rise to office, that anonymity has continued to a certain extent, and even though she is constantly by Vladimir’s side on foreign visits, the foreign press has yet to highlight Lyudmila in the way they did with Raisa Gorbachev in the 1980’s.

Lyudmila Putin’s most public work concerns her involvement with protecting and maintaining the Russian language. She is the curator of a fund designed to develop teaching of the language in schools and in preserving its heritage. 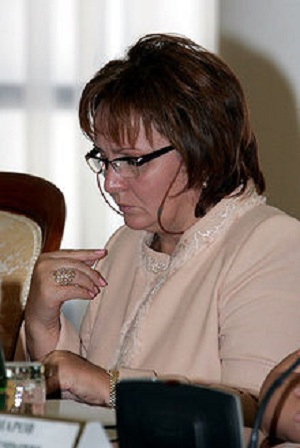 At times, she is very outspoken about orthographic reforms aimed at the way the Russian language is taught across the country.

Back in 2005, Pravda produced a rare piece on Lyudmila Putin, comparing her to Laura Bush, wife of the President of the USA at the time.

In the article, Pravda claimed that their busy lives meant that the couple saw little of each other,

”He works too hard. All members of our family know it,” she said. If someone of us wants to talk to him, we have to wait for the time when he sits down to have a cup of kefir before bedtime,”

She added that when they did talk, they often discussed politics together and in what was a very revealing interview by Russian standards, she went on to say that she finds it hard to understand her husband’s sense of humour.

“It is hard for me to understand black humour and irony. I like simple and kind humour, although I cannot say that we have only this kind of humour in our family,” she added.

Finally, in commenting on their children, Lyudmila Putin went on to underline that she is very much a typical Russian housewife.

“A child has to go to school early in the morning and stand the stressful situation for ten hours there,” she said. “Being a housewife, I can get really tired when I switch from one decision to another during the day.”

It’s unusual to get such a glimpse into the family life of any Russian or Soviet political leader and the Pravda piece from 2005, is one of the very rare glimpses into the world of Lyudmila Putin.