It still comes as a surprise for many people to learn that Russia and the USA are just a few miles apart at the shortest point. When you look at a traditional atlas, many thousands of miles separate the two countries from the east coast of America to the western tip of Russia but when you reverse those points, you’ll notice that the narrow Bering Straight is all that divides the West Coast of North America to the very edge of Siberia.

For many years now, plans have been mooted for the construction of a bridge or possibly a tunnel that would connect Russia to the USA. For various reasons, either geographical or political, this hasn’t happened but could the hypothetical Bering straight bridge ever become a reality?

The concept for a bering straight bridge goes back longer than many people realise and in fact, the first suggestion of an overland crossing between Russia and the USA appeared in 1890. William Gilpin was laying down plans for his Cosmopolitan Railway which he hoped would connect the whole world via a huge railway network and a bridge over the Bering Straight was just one small part of that. 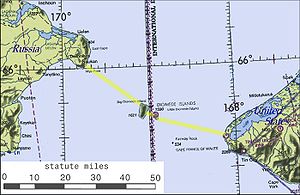 Those plans did not come to fruition but in the years that followed, several ideas were put forward including the first suggestion of a Bering Tunnel as an alternative to the overland crossing.

Some plans were rejected out of hand, either by the Russians or the Americans but when the First World War broke out, followed in 1917 by the collapse of the Russian Empire, everything was shelved.

The idea of connecting Russia and the US lay dormant for several years but in 1958, Chinese structural engineer T Y Lin brought the subject back into the public eye in a hope of uniting the people of the USA and the Soviet Union and to foster economic and other relations.

Sadly for Lin, although he continued to work on what he called the Intercontinental Peace Bridge for many years, he would never see it completed in his lifetime. When he died in 2003, China continued to take up the challenge and in 2009, a competition for the best connecting design was won by a project called Diomede Archipelago, which consisted of a system of tunnels and artificial islands.

Will it ever happen?

While China has been the driving force in the quest for a link over or under the Bering Straight, Russia and the USA seem ambivalent to the plans.

The cost is one factor and figures in excess of $105 billion have been quoted. There is also the issue of extreme Arctic winters for any material to endure and for both countries, existing infrastructure will have to improve enormously. In Russia, at the point where the bridge would end, there are no paved highways for over two thousand miles.

The Bering Straight Bridge is an exciting concept but until all of these issues are addressed, it will remain a hypothetical structure.