The Tunguska explosion in 1908 was shrouded in mystery and at the time, various theories were put forward as to what had happened.

Now, over one hundred years later, scientists have narrowed down these theories to a small selection of likely reasons but they have yet to pinpoint the exact cause of the explosion itself.

Podkamennaya Tunguska is a river located in Krasnoyarsk Krai in central Russia. Like many areas of the country, this is a sparsely populated area surrounded by miles of Siberian forest on either side.

As a result, there were only a few eye witness accounts of the actual event.

The day in question

At around 7:17 am on the morning of the 30th of June 1908, natives to the Tunguska Lake reported a bright, blue tinged light which they claimed to be nearly as bright as the sun. Those that saw it were transfixed until some ten minutes later, the huge explosion hit.

Others claim to have only heard the explosion but it laid waste to around 830 miles of forest around the lake. In human terms however, there were no major issues other than a few locals being ‘knocked off their feet’. 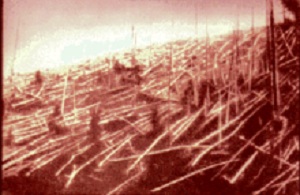 In modern comparisons, the explosion was 1,000 times more powerful than the atomic bomb dropped on Hiroshima and it was about one third as strong as the Tsar Bomba – the biggest nuclear weapon ever detonated.

Quite simply, it was the largest land explosion ever to be measured.

The concept of conspiracy theories is not a new one and after the explosion of Tunguska 1908, various explanations, some plausible, others ridiculous were put forward.

Needless to say, the theory that an alien spaceship had crashed near the sight has been expounded at great length over the years. Rather bizarrely, it seems that much of this theory has originated from a Science Fiction book called The Explosion, which was written by Alexander Kazantsev in 1946.

Many of the events in the book mirror the occurrences at Tunguska 1908 and it would appear that somewhere along the line, fact has been mixed with fantasy.

Other theories included a ‘natural’ H Bomb explosion along with the curious suggestion that it occurred as a result of the Wardenclyffe Tower experiment.

Over time, more plausible theories exploded and the likelihood is that a comet exploded in the sky, around 3 to 6 miles from the earth’s surface.

Michael Kelley from Cornell University researched the curious cloud formations that were seen over the area after the event and using new information, he began to piece together the evidence.

It is known that the night sky shone brightly for several days across Europe and it’s believed that this phenomenon was caused by vapour being released into the air. A similar sight occurred on a smaller scale after the launch of the first space shuttle and it now seems that a comet is the most likely cause.

The events of Tunguska 1908 underline just how much the earth is at the mercy of space debris and the forest remains as a testament to that incredible day.