If you’re a Russian Rugby fan, this summer is a great time to be based in the UK – over the next few months, the Russian Rugby team will be playing six full matches in England and Wales, plus they will be participating in the London and Edinburgh sevens tournaments.

First up, Russia’s Rugby Sevens team will be flying over to take part in the final two rounds of the IRB’s Sevens World Series. 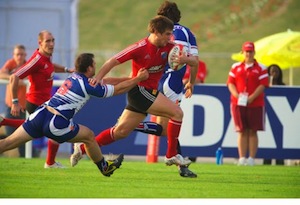 I doubt they’ll progress too far in either tournament, but they’re improving rapidly and certainly capable of pulling off a shock or two. At their only other sevens outing this year – the Hong Kong Sevens in March – they ran both Fiji and England very close.

Normally held in North America, the Churchill Cup has migrated to England for 2011. Russia, taking part for the second time, have been drawn in the easier of the two groups and will play Canada on 8th June and Italy A on 12th June. Both teams are, objectively, stronger than Russia though, and they’ll be extremely tough matches.

The other group features England Saxons, Tonga and the United States, and here’s what makes this tournament interesting…

…if all goes to form, Russia and the United States should both finish bottom of their groups, qualifying for the 5th/6th place playoff. The two teams are due to meet at the Rugby World Cup in New Zealand this autumn, so this could be an intriguing preview of the clash of the Rugby Cold Warriors.

Russia have decided to test themselves against a couple of Welsh domestic teams as they prepare for September’s Rugby World Cup. They’ve lined up matches against Newport Gwent Dragons on 17th August, and then against Ospreys on 20th August.

Russia will want to go into the World Cup on the back of a couple of tough matches, but not so tough that they suffer injuries or are demoralised by heavy defeats. With that in mind, I think they’ve made a really good choice here, as Ospreys and Newport-Gwent will also want tough matches as they prepare for their forthcoming domestic seasons, but will want to take the opportunity to try out some young fringe players as well.