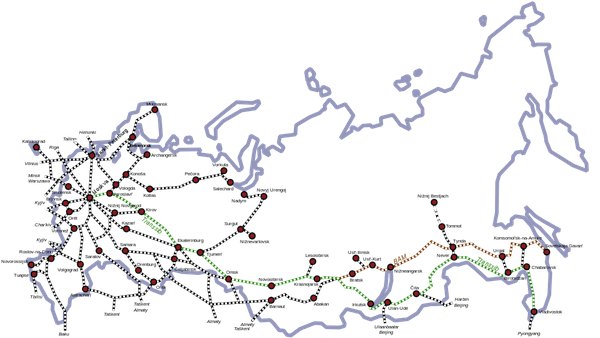 To give you an indication of the scale of its importance, Russian Railways, the state owned company that runs Russia’s railways, employs 950,000 people – that’s right, almost a million people, just to work on the railways. There are more than 50,000 miles of rails across Russia, only slightly less than the total number in the United States.

The first Russian railway track was built in 1837 between St Petersburg and Tsarskoye-Selo, linking two of the most important imperial palaces. Unusually, it was built entirely as a pet project of the Tsar, and had no economic rationale. The first main railway line in Russia was started five years later, in 1842, and by 1851 it had grown to link St Petersburg (then the Russian capital city) and Moscow.

The Russian railway network grew steadily over the next fifty years, including the construction of the Trans Caspian Railway, linking central Russia to its Central Asian empire, and the Trans-Siberian Railway, which proved a vital link in the development of Siberia and the Russian Far East, as well as providing a vital connection to China.

Most of this development work was undone during the First World War, and the Russian Civil War, during which well over half of the rail network and more than three quarters of Russian trains were destroyed.

The importance of the rail network to Russia, though, can be seen by the way that the Soviet Government rapidly rebuilt and expanded the now Soviet rail network. By 1940 it had expanded to just over 100,000 kilometers (more even than the 85,500 kilometers in operation today) and, with the addition of new lines such as the Baikal-Amur mainline, it reached almost 150,000km in length at its peak.

Train travel remains popular in Russia, largely because the individual passenger’s costs are heavily subsidised by the income received from transporting freight. In 2000, for example, a commuter would have paid around 15% of the actual cost of transport. The Government is rapidly phasing out these subsidies, however – today a commuter will pay more than 50% of the ‘real’ fare, and over time this will be increased to 100%.

The most famous railway line in Russia, especially among tourists, is the Trans-Siberian railway. The trans-siberian is the longest railway in the world, connecting European Russia with the Russian Far East, Mongolia, China and the Sea of Japan.

It runs through most major Russian cities – the main line, for example, starts in St Petersburg, then on to Moscow, Chelyabinsk, Omsk, Novosibirsk, Irkutsk, Ulan Ude, Chita, Kharabovsk and finishing in Vladivostok.

You can easily arranged organised Trans-Siberian railway tours for quite considerable cost – for example the Golden Eagle Trans-Siberian Express, which can probably be best described as a Russian Orient Express. But if you are a traveller on a budget, you can buy trans-siberian railway tickets for as little as 250 Euros.