For the first time in their history, Russia qualify for the Rugby World Cup Finals. 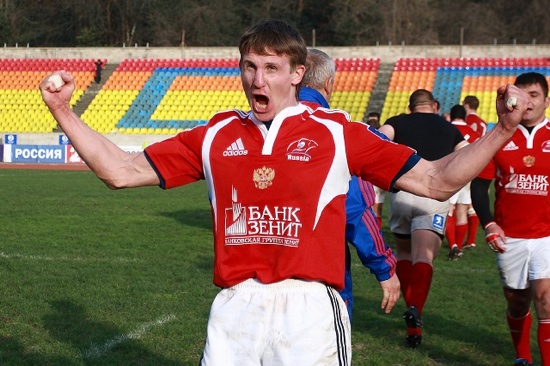 Russia have qualified for the Rugby World Cup!

A thrilling 21-21 draw with rivals Romania on Saturday means that, despite the season not yet being finished, they cannot be caught by either Portugal or Romania. Georgia, who currently top the table by a single point, have also qualified.

The game itself was a nerve-wracking one. Russia launched out of the gates like a team on a mission, and quickly roared into a commanding lead – two tries by centre Alexander Gvozdovsky, plus a conversion and two penalties from fly half Yuri Kushnarev left Russia 18-3 ahead at the interval, and looking set to run away with the game.

But Russia’s good form was not to continue. Perhaps nervous at the prospect of their first trip to the World Cup Finals, or perhaps simply outplayed by a Romanian team that knew they were fighting for their own last chance at qualification, they were comprehensively outplayed by the visitors in the second half, who fought back to level the scores just minutes before the end of the match.

In the weekend’s other matches, Georgia defeated a surprisingly strong Spain team 17-9 in Tblisi to book their place to New Zealand, and Portugal handed out a 69-0 thumping to Germany to keep them well placed for the third place spot, and a playoff for world cup qualification.

Although there are two rounds of matches left to play, it looks increasingly likely that Georgia will slot into Pool B, one of the toughest World Cup groups containing Argentina, England, Scotland and another (not yet decided) qualifier, and Russia will join Pool B to set up an intriguing tie with the United States as well as matches against Australia, Ireland and Italy.