Note: This post was updated on 6 April 2009 to make clear that the European Nations Cup is a two year tournament, and that neither Russia nor Georgia have yet qualified for the 2011 Rugby World Cup. 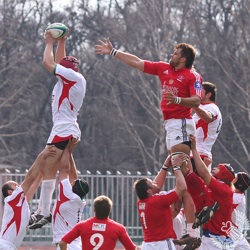 Georgia beat Russia 29-21 in a thrilling encounter to secure first position in the rugby European Nations Cup at the mid-way point of the two-year season.

Held in neutral Ukraine because of last year’s war between the two countries, the game had been keenly anticipated. Georgia, favourites to win the title at the start of the season had stumbled in an earlier game against Portugal and Russia, with a 100% win record, had been considered by many to be the slight favourites.

But it was Georgia who stormed out of the blocks. Three first half tries left the Russians reeling. 21-6 down at the break, they looked to have no chance.

Two second half tries pulled a resilient Russian team back into contention and, at one point, they closed the gap to just three points. But 24-21 was the closest Russia were to get to the title.

One final surge across the try-line, and the Georgians were deserved 29-21 victors.

The result leaves Georgia three points clear of Russia at the mid-way point of this two-year tournament, although Russia have a game in hand against tournament new boys Germany, which should see Russia close the gap to just one point.

This leaves everything to play for next season as Georgia, Russia and Portugal (currently sandwiched between Georgia and Russia in the table) vie for not only the tournament title, but two automatic places at the 2011 Rugby World Cup.

Sadly I haven’t been able to find full video highlights of the match online. The Georgian fans are very well organised and put videos up on youtube immediately after each match, but sadly they tend to only show their own team’s scores.