If you’re travelling into Moscow, there are not one but four international airports here. In all likelihood you will arrive, like the majority of travellers, at Sheremetyevo or Domodedovo but there are other locations here besides.

Sheremetyevo airport may well be the most common arrival point but it’s not actually the largest airport in Russia. However, this is one of the busiest airports in Europe and in 2010, it’s reported that 19,329,000 passed through here on just under 185,000 flights.

Sheremetyevo is a recent addition to Moscow’s airport portfolio having originally been built in 1959. Considerable expansion followed in 1980 with the opening of the second, and larger terminal which was specifically constructed with the Summer Olympics in mind. 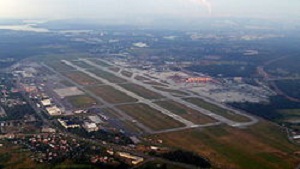 Location-wise, Sheremetyevo can be found some 29 kilometres (18 miles) north west of the city centre and with this being the main hub for the national carrier Aeroflot, you can expect that most major cities across the world are served by direct flights.

Domodedovo is the biggest and busiest airport in Moscow by some distance and in 2010, some 22.5 million passengers passed through its gates. On arrival here, you will find yourself some 42 kilometres, (26 miles) south / south-east of central Moscow.

This is another new location and the first flight from Domodedovo took place in 1964 when a Tupolev 104 carried out a domestic journey to Yekaterinburg. The airport was officially opened a year later and has continued to expand ever since.

A second runway was added in 1975 and there was some considerable expansion in the mid 1990’s, following the collapse of the Soviet Union.

That expansion has also continued in recent times and in 2003, work was carried out at Domodedovo to accommodate a new range of wide-bodied aircraft. After the work was finished to required standards, approval was granted and these new aircraft have added to the already considerable fleet at Domodedovo.

Vnukovo is the oldest of Moscow’s four airports, having first opened its runway back in 1941. It is also much closer to the centre of the city than Domodedovo and Sheremetyevo, and can be found some 28 kilometres, (17 miles) south west of Moscow itself.

Vnukovo has two runways and carries around half the passengers and aircraft traffic of the larger Domodedovo. There is however, further expansion planned to accommodate a continued growth in tourism.

External flights from this airport tend to remain within the former Soviet Union with some exceptions such as Barcelona and Berlin.

Ostafyevo is the fourth airport in Moscow and it opened in 2000 on the site of a former military base.

A B Class airport run by Gazprom, it is designed mainly to accommodate the business traveller.

Whichever of the main Moscow airports you fly into, you will find a modern setting using cutting edge technology to cope with the vast increase in tourism in Russia as a whole.

As that increase continues, those four airports continue to grow at the same time and continuing expansion is bringing bigger and better facilities.