During the late 1990s and early 21st century, Aeroflot operated two Boeing 777 200ER jet airliners on flights to Russia. The 777s were leased by Aeroflot from International Lease Finance, a specialist aircraft leasing company that leases jets to major airlines around the world.

Aeroflot no longer uses Boeing 777s. The two planes it leased from ILF are now at Vietnam airlines – VN-A147 and VN-A151 respectively. (Source: http://forums.jetphotos.net/showthread.php?t=38413) However, you can see a picture of the Aeroflot 777 in flight below. 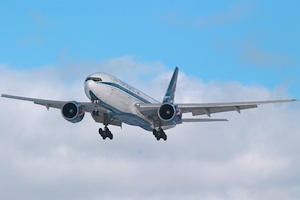 Aeroflot still does use a number of other Boeing planes – there are eleven Aeroflot 767 planes in service, and the company have placed orders with Boeing for 65 additional Aeroflot 737 and 22 Aeroflot 787 planes. Currently, most of the rest of the Aeroflot fleet is made up of Airbus planes – the Aeroflot airbus fleet includes mostly A319, A320 and A321 planes.

Aeroflot’s modern reliance on imported planes marks a dramatic departure from the Soviet and early post-Soviet eras, when Aeroflot mostly flew Soviet made planes, such as the Ilyushin, the Antonov and the Tupolev. However the company is coming under increasing pressure from the Russian government to buy more Russian made planes, to help to prop up the stagnant Russian aircraft manufacturing industry, so we may well see a return of some of the famous old Soviet names making a comeback, particularly in the Russian domestic flight market.