Why did Napoleon invade Russia?

Napoleons invasion of Russia in 1812 led to a humiliating defeat and withdrawal and a complete destruction of the French Allied Army. Looking back on events, historians claim that the notorious French leader was simply foolish to take on the might of Imperialist Russia so why did he invade?

Elsewhere, Napoleon had moved his forces through much of Europe unchallenged and it seemed that Russia and the United Kingdom were the only two nations standing in the way of complete continental dominance.

As part of his on-going battle with the United Kingdom, the French had implemented their continental blockade which was effectively a full trade embargo. Without the necessary resources to defeat his enemy in battle, Napoleon had enforced the embargo against the emerging industrial power in an attempt to force poverty, debt and ultimate surrender.

Russias part in the embargo

The blockade had begun in 1806 and had become widespread across Europe but Russia were viewed as being critical to the campaigns success. The reason for the invasion was therefore identified by many as an attempt to keep Tsar Alexander I as supporters of the embargo.

This is a more likely scenario although an official reason was that the French Emperor had intended to prevent Russia from invading Poland and as such, the conflict was named as the Second Polish War. In Russia however, it came to be known as the Patriotic War.

The conflict began on the 24th June 1812 as Napoleons troops crossed the River Neman and into Western Russia. With numbers of around half a million, they comfortably succeeded in some minor skirmishes while in August of that year, the invading army won the strategic Battle of Smolensk. 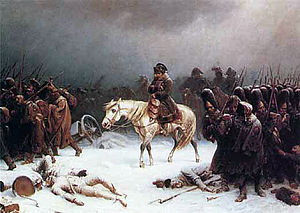 However, while the Grande Armee were capturing Smolensk, the Russians won a crucial battle at Polotsk which prevented Napoleon from marching on the capital St Petersburg. As a result the Emperor resolved that the war itself had to be won in Moscow.

Napoleons forces reached Moscow in September by which time the Tsar had made a crucial tactical switch, removing his ineffective Commander in Chief and replacing him with Prince Mikhail Kutuzov.

At the battle of Borodino, Napoleons army won but in a single day there had been 70,000 casualties on both sides. The French couldnt sustain such losses and after peace talks failed, Napoleon began his long and humiliating retreat from Moscow.

Prior to the war of 1812, Napoleon was an undefeated military genius but the defeat had dealt a blow to his aim of European dominance from which he would never recover. In addition to the losses on the battlefield, many of his troops died on the long retreat.

The conflict also sparked the War of the Sixth Coalition which was responsible for finally defeating Napoleon and sending him into exile on Elba.

The reasons for Napoleon invading Russia may have been twofold but this was his first military mistake and one which was to ultimately cost him an Empire.