Although she was the second daughter of Tsar Nicholas II and his wife Tsarina Alexandra and one of three Romanov sisters, she is by far the most well known from a historical viewpoint.

Tatiana was born Tatiana Nikolaevna Romanova in St Petersburg on 10th June, 1897. The younger sister of Olga, it is said that all four Romanov siblings were close to each other and in turn, unlike other Royal children through Russian history, they were very close to their parents.

The Romanov children had an odd, slightly austere upbringing, sleeping on camp beds without pillows and taking a cold bath every morning.

Like her siblings, Tatiana was uncomfortable whenever anyone addressed her by her official title and when she was referred to as ‘your Imperial Highness’ by the Royal Lady in Waiting, it is said that she retorted with “Are you crazy to speak to me like that?” while kicking the unfortunate woman in the process. 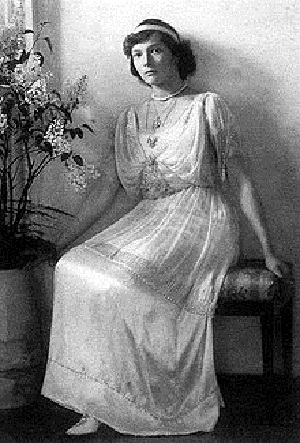 Like her older sister Olga, Tatiana Romanov is best known for her compassionate work during World War I. She headed Red Cross committees and nursed many wounded soldiers herself.

This work continued right up until the Romanov family’s arrest in 1917.

Tatiana is also known for her relations with the mystic Grigory Rasputin who had been called to court with ultimately devastating consequences.

Rasputin had worked to heal her much-loved brother Alexei who had suffered with haemophilia since birth and the success had raised the so-called ‘Mad Monk’ in her affections.

By all accounts, Rasputin’s relationship with Tatiana was innocent but the fact that he was allowed such wide and direct access to the court set off a chain of gossip that suggested otherwise.

According to some literary works that have emerged in recent years, Tatiana Romanov is believed to have fallen in love on more than one occasion. A romance with Dmitri Yakovlevich Malama, a wounded soldier who came into her care is particularly highlighted.

It’s also believed that Peter I of Serbia sought a marriage between Tatiana and his son Prince Alexander. A letter was delivered to the Tsar who declared that his daughters were all free to choose their husbands and that he wouldn’t pressurise them. In any event, ‘negotiations’ halted with the outbreak of World War One.

Along with the rest of her family, Tatiana was arrested and imprisoned following the 1917 revolution. According to reports, she was lost without her work and continued to pine for the chance to continue tending the wounded.

That chance never came and at Yekaterinburg one year later, she was horrifically executed along with her family. Rumours were rife that she had escaped but these proved groundless. It was an unspeakable end to a life that had been devoted to others.

Tatiana and her family were canonised by the Russian Orthodox Church in 2000. Their bodies had been interred at St Petersburg two years earlier as the last of the Romanovs were finally laid to rest.