The Cold War was so called because it thankfully didnt cross over into military conflict but those who lived through the times when tensions were at their highest will never forget the constant underlying threat. As the Soviet Union and its satellite nations united against the west, the promise of a Third World War was never far away.

The Satellite nations from the east were all under Communist rule for much of the 20th century and although they may have held differences between themselves, the Soviet Union, East Germany, Czechoslovakia, Poland, Hungary, Romania, Yugoslavia, Bulgaria and Albania were all together against a common enemy.

The Soviets, the United States and Great Britain had of course been allies in the Second World War but cordial relations were soon to disappear once the conflict was over.

Relations soured shortly after the end of the war but it had been felt in some quarters that the alliance between the Soviets and parts of the west had merely masked a feeling of simmering hostility. 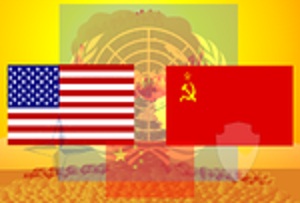 After the death of President Roosevelt, his successor Harry S Truman told Stalin that the US would be taking a tougher stance towards the East.

Furthermore, the Marshall Plan which was intended to rebuild parts of Europe was boycotted by the Soviets  a clear sign that all was not well.

This underlying period of tension erupted in spectacular fashion at the end of the decade. Post-war Germany was under multi-national control but the Soviets intended to take sole leadership of Berlin. As a result, they enforced a rail blockade that prevented incoming supplies, leading to the Berlin Airlift which thwarted Stalins attempts to starve the capital.

The airlift was successful but ultimately the blockade led to two German states with East Germany emerging as a new nation.

The 1950s saw tensions increase and these were to persist until the very last days of the Soviet Union. Among the most significant events in this decade was the Korean War which didnt see open conflict but led to a difference of views and a worsening of relations.

In the early 1960s however, the Cuban Missile Crisis saw the two factions engage in a tense stand off with a serious possibility of war looming. At the time, although it may seem hard to believe now, many people across the planet seriously believed that the world was coming to an end.

Although tension continued from both sides and the question of nuclear arms became a constant threat, the Cuban missile crisis was as close as we got to seeing a Third World War.

Through the second half of the 1980s, Ronald Reagan and Mikhail Gorbachevs relationship seemed increasingly cordial and finally, with the collapse of the Soviet Union in 1991, the Cold War was at an end.

Tension may remain between east and west to a certain degree but it has yet to match the feelings of hostility and the threat of open conflict that the Satellite Nations Cold War brought for a period of nearly fifty years.