It’s been a disastrous weekend for Russia’s European Nations Cup campaign. But a good one for Romania and Georgia.

After narrowly losing their last match at home to Portugal the Bears travelled to Romania knowing that a win was vital if they were to have any realistic hope of the title. Instead, they were routed by their hosts and came away on the wrong end of a 33:3 beating.

“It was an extraordinary game. We dominated it; I don’t think the Russians spent more than ten minutes in our half. We played with commitment, just like we did in the qualifiers. I hope we won’t rest on our laurels and we’ll win the games that we still have to play ahead of the World Cham­pionship,” Romanian player Sorin Socol stated for Gsptv.

Frankly, there’s nothing good that can be said about Russia’s performance at the weekend – this is a team that has really been hit hard by the departure of their English coach Steve Diamond. Incoming coach the ex-Wales captain Kingsley Jones, who saw his charges in action for the first time this weekend and had been lined up to lead them into this autumn’s World Cup, might well be having second thoughts.

Defeat to Romania leaves Russia in fifth place in the table, nine points behind leaders Georgia (more on them in a minute).

To cheer you up, here’s a picture of the pitch just before the match. You would have thought the conditions were ideal for the men from the east. 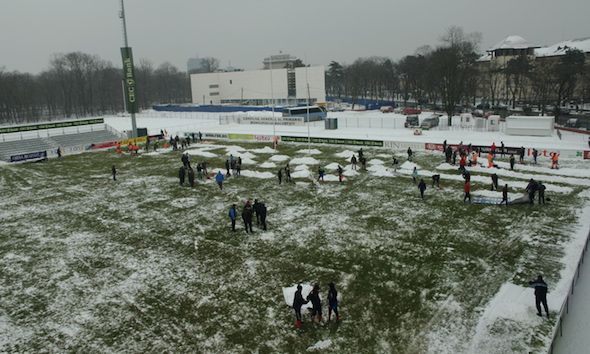 As I predicted last week, Georgia came home from Lisbon with a ground out win over Portugal. So close was the match that it was only settled when Portugal missed a penalty kick in the last minute. Portugal will be gutted, as they’re looking quite impressive this season (they’ve already beaten both Romania and Russia) and really missed their best chance to force themselves into the title race. But, by most accounts, Georgia were the better team throughout the match, and did score the game’s only try, so on balance I think they deserved to come home with the points.

Here are the video highlights:

In the weekend’s final match, Spain got their expected victory over Ukraine. Their 35:15 victory margin wasn’t overly impressive against the division’s new boys though.

Romania’s victory means that they leapfrog Russia into 18th place in the world rankings, leaving Russia only marginally ahead of Portugal – indeed, a victory for Portugal this weekend could even have pushed Russia down into 20th. The win was good news for Georgia though – although they stay in 15th, they’ve moved to within a whisker of overtaking Canada. A few more wins and a good world cup might well see Georgia within striking distance of Italy…

Another mini-break this weekend will be followed the weekend after by a morale boosting trip to Ukraine for Russia, in a game they should win comfortably. Spain take on Portugal in the Iberian derby – Spain are the home team so it’ll be close, but I’d pick Portugal to edge it. And, in the weekend’s most intriguing tie, Romania travel to Tbilisi to take on Georgia. I expect Georgia to win, but it’s worth remembering that Romania beat Georgia 22:10 in 2010 match, and ran the Georgians very close in 2009, the last time they visited Tbilisi.