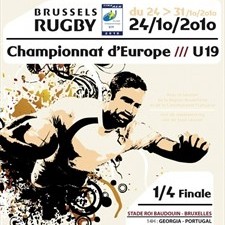 After the Russian team’s surprise 3rd place finish in the Junior World Trophy tournament, held in Moscow earlier this year, the final of the tournament had been anticipated as a hard fought battle. But Russia’s massive investment in building up their rugby infrastructure didn’t pay off, and the much more physical and well drilled Georgia team outscored Russia five tries to one on the way to a comfortable 38-7 victory.

Some consolation for Russia though – by virtue of reaching the final, both teams have qualified for the 2011 Junior World Trophy, at which they’ll again hope to impress.

Changing topic slightly, if you’re a fan of Russia rugby, you’ll want to keep an eye out over the next few weeks, as Russia are scheduled to play the Argentinian Jaguars twice in the next two weeks (the Jaguars are effectively the Argentinian ‘B’ team), before flying out to Japan to take on a strong Japanese team that have already beaten Tonga and Samoa this year (might not sound like much to a non-rugby fan but, trust me, these are tough teams to beat!).

If Russia can come out of these three games with even a single win, they’ll be delighted. More likely, though, they’ll come away with three defeats, and a lot of lessons learned ahead of next year’s World Cup.

For more on these games, check out this IRB interview with Howard Thomas, Vice President of the Russian Rugby Federation.